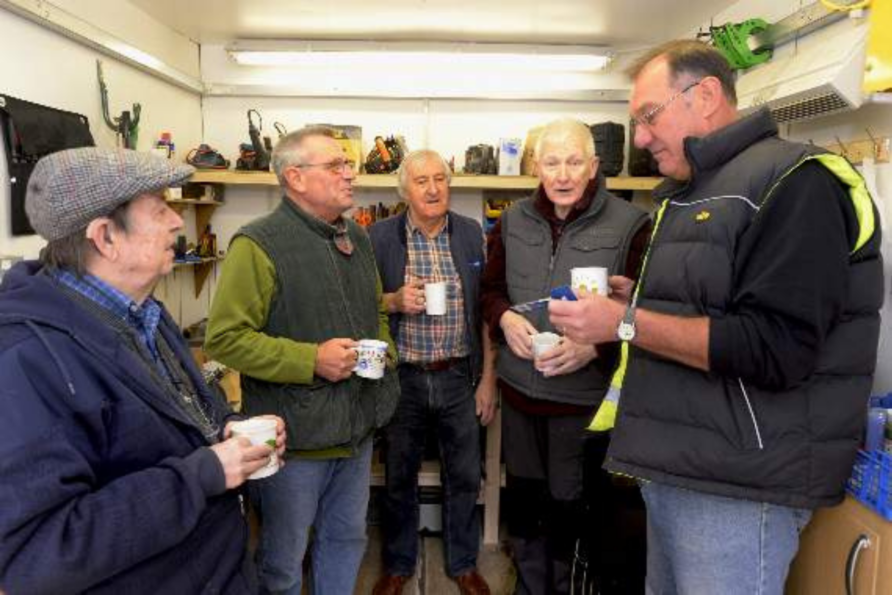 As Men’s Sheds are opening up after the lockdown, many are finding they have lost members. Some have found new interests, others are anxious about joining in a group activity or for a whole variety of reasons from moving away or having passed away due to age or illness including Covid 19.

Some sheds are finding that new members are appearing as people have realised during the lockdown the benefit of connecting with others.

Some sheds that were just getting started before lockdown or have lost members are keen to attract new members.

Over the last few years, I have helped a number of sheds get off the ground and have observed different ways that Men’s Sheds attract new members. Here are my thoughts on what seems to work and a number of things to be wary of that can put people off joining a shed.

Whilst we all know the mental and physical health benefits of being a member of a Men’s Shed, there is a real danger that if the shed is just seen as a mental health project, many guys will be put off being involved. Many men will see being involved in a mental health project as a weakness and, even if they long for the companionship they once experienced in the workplace, would avoid a shed if promoted in this way.

So my advice is always to emphasise the positive side of a shed i.e. the shed is a place for guys to engage in practical projects, whether that is one’s own project or a community project. It’s a place for fun friendship and with no pressure to be involved, i.e. you come and are as accepted as you are.

It may be that you want to come and use the facility to make a wooden toy for a grandchild or to get involved in community projects or simply to come and drink coffee that is entirely up to you.

I know one prospective shed member who came to a couple of meeting about setting up a men’s shed. However, when there was pressure to be involved in community projects, he made it clear to me that that wasn’t why he wanted to be involved and from then on gave the shed a wide birth. This was a great shame as he had great skills to share with the other members and I feel both lost out.

Clearly one of the best ways to grow membership is for members to invite other members along. It is useful to have appropriate publicity to help with this such as flyers or invitation cards. The UK Men’s Sheds Association also have small metal lapel badges which can be a starting point for a conversation. T-shirts or sweatshirts are another good way to start conversations and there are certainly shed members whose first introduction to a shed was by asking the wearer of a Shed shirt about it.

If the shed is difficult to find then in effect it is invisible so do look for ways to give the shed a higher profile – perhaps a large banner or sign on the building and mini posters in libraries, doctors surgeries, community buildings and notice boards.

Whilst some people won’t want to be involved in a shed themselves, they can be advocates for the shed by signposting people. So connect with shed advocates and invite them along to see what it is all about. Advocates are often people involved in the community, not just professionals like doctors, social prescribers, clergy local councillors, and community development workers, but others such as a local shop keeper, staff in a local hardware or DIY store and personal officers in employers who can refer people to a shed when they are retiring.

When Ripon Men’s Shed was starting a café owner was key in promoting the shed to the older men who used to frequent her café.

Some sheds have found opportunities to make presentations to local membership groups such as the Lions, Rotary, Parish and Town Councils, Probus and Women’s institutes. Whilst these groups may be a source of members themselves, the contacts made will often result in wider referrals to the shed as well as gifts of timber and tools. Women’s groups should not be neglected, not only if the shed is open to women or has women’s only sessions, but often it will be women who encourage partners and husbands to go along to the shed.

These days having some form of social media presence is really helpful. Some sheds develop their own website or Facebook page. However, to promote the shed, what is perhaps more important is to get the message out via existing community social media. For example, some communities will have their own Facebook or WhatsApp groups. When Shipton Men’s sheds were starting posts on the local town Facebook site about the inaugural meeting resulted in good attendance.

Getting the message out about the shed in local media such as a local parish magazine or the local press is often easier than it would seem. However, being clear on messages to be conveyed is important as local newspaper reporters seem to like to pick up on the mental health benefits rather than the fun and friendship message outlined above. One way to be more in control of the message is to prepare a media release. Often these get used verbatim. However, an editor will cut from the bottom so be sure to include important information, such as an opening day, earlier in the release or within a quote. Including a quote is useful as editors like to include the voice of members.

Make sure you keep an eye out for new members appearing and make sure you welcome them, offer them a cup of tea or coffee and cake so they can relax. Show them around and introduce them to other members.

Be sure to ask them about their skills and interests they have or want to learn. This can even be the start of a new activity for the shed.

Whilst you will be keen to encourage them to join, it is best to offer a period of free trial membership for a month so people can find out if the shed is right for them.

Whilst you may be keen to get people signed up, don’t put them under any pressure. The opportunities the shed has to offer will sell itself and putting people under pressure is manipulative and is very off-putting and prospective members will run a mile.